Mail-in Your Ballot for the November 3, 2015 Election 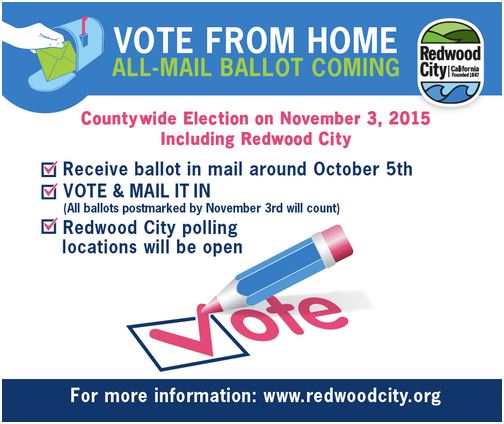 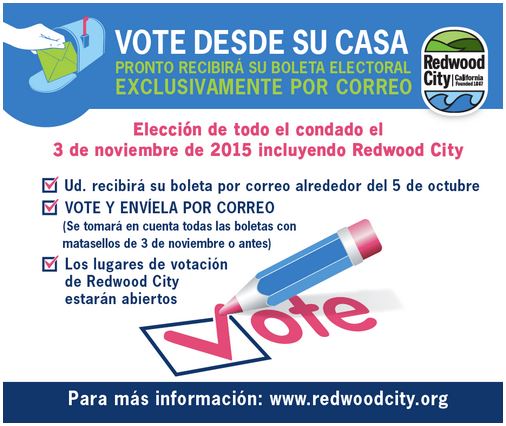 Download the vote-by-mail brochure! Available in English and Espagñol!

All jurisdictions within San Mateo County will participate, including Redwood City. Voters will benefit by being able to vote by mail while still having polling place voting options on Election Day. There will also be one drop off location in each city beginning 28 days before an election.

WHAT THIS MEANS FOR REDWOOD CITY RESIDENTS

All jurisdictions in San Mateo County have approved the All-Mailed Ballot Pilot Program, which means that the upcoming election on November 3, 2015 will be a vote-by-mail election.

Every voter in the city will receive his or her ballot in the mail. Ballots will be sent 29 days prior to Election Day (October 5, 2015).

If a voter doesn’t receive his or her ballot by October 12, 2015, they should contact the office of Mark Church, Chief Elections Officer & Assessor-County Clerk-Recorder, by phone at 650-312-5222 or by email at registrar@smcare.org.

By law, as long as a vote by mail ballot is postmarked on or before Election Day and received within three calendar days, it will be counted. Ballots that are postmarked on or before November 3, 2015 and received by November 6, 2015 will be counted. Ballots can also be dropped off at Redwood City’s City Hall (1017 Middlefield Rd) in a drop-off box that will open 28 days before the election.

For those who do not wish to vote by mail, there will be four polling locations in Redwood City where a ballot can be cast in person:

In addition, there will be two Voting Centers in San Mateo County where a ballot can be cast in person.

The Voting Centers will open 29 days prior to Election Day (October 5, 2015) and allow voters to cast their ballots Monday through Friday 8 a.m. to 5 p.m. on an accessible electronic voting machine or on a paper ballot. The Voting Centers will also be open the Saturday prior to Election Day (October 31, 2015) from 10 a.m. to 3 p.m.

Learn more about the election and the pilot program at the official County website: https://www.shapethefuture.org/ab2028/