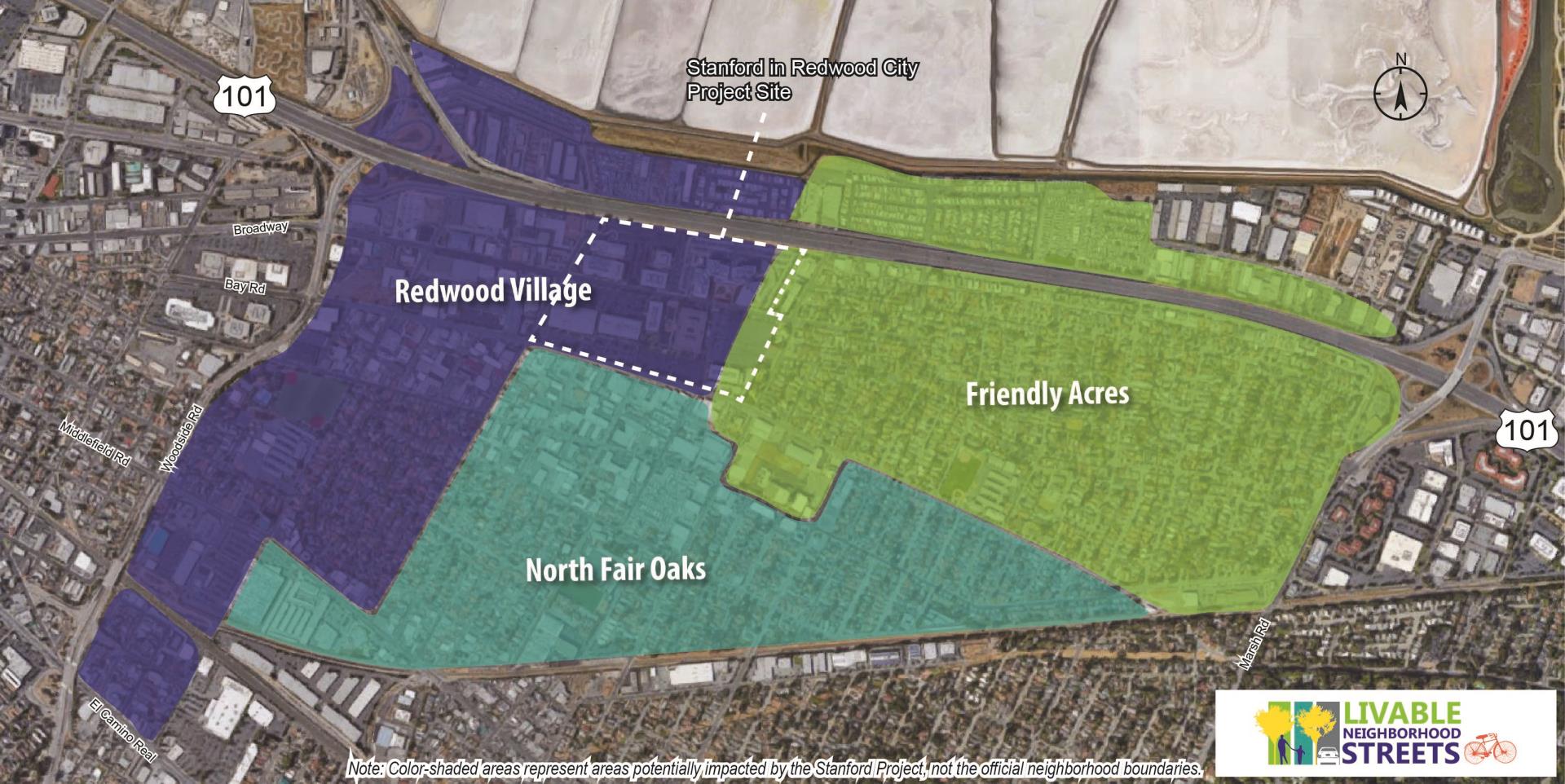 As part of the approved Development Agreement, Stanford University agreed to contribute $1,500,000 toward a Livable Neighborhood Streets program for the three neighborhoods potentially affected by the new office campus (referred to as the Neighborhood Street Enhancement Program in the Development Agreement). These funds are for neighborhood signage, trees, bulb-outs, landscape elements, bicycle facilities, traffic circles, chicanes, or other features that create an attractive neighborhood boundary and discourage cut-through traffic. The first distribution of $750,000 has been provided to the city.

Plans for the first phase of the Stanford campus were submitted in early 2016, with preliminary community meetings held in the spring and approval of the first phase upheld by the City Council in December 2016.  Development of this phase includes four new office buildings, one parking structure, and three amenity buildings (fitness center, childcare facility, transit center, cafeteria, central energy facility, etc.), adding roughly 300,000 square feet of net new development to the area. The timeline for future phases is unknown at this time.

Initial neighborhood outreach to discuss potential impacts to the neighborhoods and the types of enhancements the community would like were held prior to the Stanford Project approval. In continuing this process and in selecting a funding alternative that is favorable to the neighborhoods, the City has hired the consulting team of TJKM (transportation specialists) and Gates + Associates (designers and community facilitators). This team is helping to coordinate and facilitate further neighborhood outreach, complete technical studies, develop conceptual designs, and provide cost estimates for favored neighborhood alternatives. This process will take approximately nine months.

Redwood City hosted the first round of neighborhood meetings with Friendly Acres, Redwood Village, and North Fair Oaks during the second week in February. These meetings built on the input already provided by each neighborhood, beginning the process of prioritizing enhancements that the residents had identified. The city provided an overview of the Livable Neighborhood Streets project and the work plan and provided information on existing conditions. Community members collectively brainstormed potential improvements and prioritized projects.

Neighborhood Streets Enhancements are elements that go beyond routine street maintenance such as filling potholes. Potential enhancements may include speed humps, pedestrian-scale lighting, street trees, bicycle facilities (bike lanes, bike parking, etc.), wider sidewalks, bulb-outs, traffic circles, chicanes, and similar elements to calm traffic and improve the quality of life in the neighborhood. Potential benefits and trade-offs were discussed as well as the possibility of grant funding to increase the project budget.

At the end of the process, in addition to meetings with the individual neighborhoods, the city will host a meeting where the three neighborhoods can share information, coordinate projects, and define overall priorities.

Round One of Community Meetings

Round Two of Community Meetings

Free viewers are required for some of the attached documents.
They can be downloaded by clicking on the icons below.