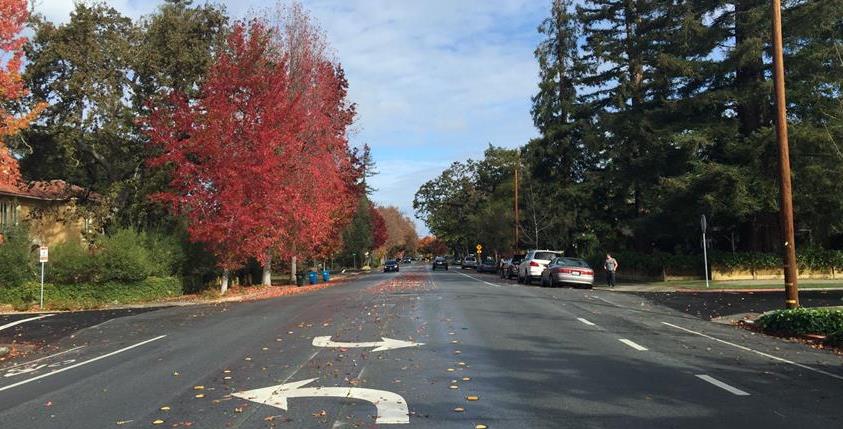 Thank you to all the residents who attended the community meeting on February 20, there was a great turnout! Staff are compiling feedback received from the attendees, over 100 people, to finalize the conceptual design. The full pilot evaluation will be posted once it is finalized in the next couple of weeks. After the conceptual design is updated, the consultant will update their cost estimate and a final survey will ask residents whether the revised traffic calming design should be made permanent. The traffic calming policy requires a majority of the survey respondents approve of the design in order for staff to recommend building the project to the City Council.

Survey results will be distributed to the stakeholder list, posted on the project web page and presented to the Transportation Advisory Committee before a final recommendation is made to the City Council. When specific meeting dates are set, we will post an update and notify the community.

Hopkins Avenue is a residential street connecting area residents to local destinations (e.g. Stafford Park) and to roads that access local and regional destinations (e.g. Alameda de las Pulgas, El Camino Real). In response to concerns raised by residents about the speed and volume of traffic on Hopkins Avenue, the City collected preliminary traffic-related data. Due to the width of the street (greater than 40’ wide), its classification as a minor collector street, and traffic volumes (more than 3,000 vehicles per day), a variety of traffic calming devices (median islands, curb extensions, traffic circles, etc.) would be used to slow traffic. Due to the cost and trade-offs associated with these measures the City uses a community process to define the preferred design.

A survey to solicit community feedback on the pilot design was open from December 20 through January 15. Surveys could be completed online or by returning a physical copy of the survey to City Hall. Over 400 responses were received from distinct addresses.

The Mayor, Vice Mayor, and staff from the engineering division and fire department met with community members to address some remaining concerns regarding the pilot project. As a result of the meeting, the following changes have been made to the plans:

The updated plans are now available to view here.

The Complete Streets Advisory Committee (CSAC) recommended forwarding the Hopkins Avenue Traffic Safety Project to the City Council for their consideration. The committee supported the design as proposed, with the exception of the permanent medians which they felt should be piloted before making permanent. The pilot would include an evaluation of the effectiveness of the design and further community feedback.

A survey was administered to gauge neighborhood support for the conceptual design in December, 2017.  A majority (63%) of the respondents (223) supported the conceptual plan.

Redwood City hosted a meeting to share community feedback and to discuss conceptual designs for the corridor.

Redwood City hosted a community meeting to discuss a possible traffic calming project on Hopkins Avenue. At the meeting, attendees agreed that existing traffic volumes, speeds, and behavior were undesirable, and they expressed interest in making changes to the street to minimize this behavior. However, no consensus was reached in terms of what the design should look like.

Redwood City staff met with a small group of residents to better understand their concerns and to solicit ideas for changes to the street.  Based on this feedback and the data collected, a Redwood City transportation consultant developed a traffic calming concept for the street. The concept was presented at the Dec. 8, 2015 Community Meeting.

After the City develops the traffic calming prioritization system, this website and interested residents will be updated on the status of a Hopkins project. No traffic calming changes will be made without additional community meetings, but Redwood City will continue to process traffic engineering requests (e.g. sign visibility, stop signs, red curb).

Staff will present the survey results on the pilot design and the technical evaluation at a community meeting on February 20. At the meeting, we will discuss a revised design that takes into account community feedback from the survey.

After the community meeting, a final survey will ask residents whether or not the revised traffic calming design should be made permanent. Survey results will be distributed to the stakeholder list, posted on the project website and presented to the Transportation Advisory Committee before a final recommendation is made to the City Council.

Thank you to everyone who completed the survey on the design of the pilot project, there were over 400 responses! The consultants are summarizing the survey results and completing the technical evaluation of the project. Staff are working on finding a meeting time and venue to present the survey results, evaluation, and any revised design.

After the community meeting, a follow-up survey will ask whether or not the pilot project should be made permanent.

Upcoming work is focused on evaluating the effectiveness of the pilot, refining the pilot design into a preferred alternative and deciding whether the pilot will be made permanent. Please complete the pilot survey by 11:59 p.m. on January 12 to share your feedback on the pilot design and how effective it has been at reducing speeding, improving driver behavior, and making it safer to use or cross Hopkins Avenue. The survey can be completed online here or with a paper copy to be returned to City Hall via email, dropped off at City Hall, or sent through U.S. Mail.

Installation of the pilot is substantially complete and the City is collecting data on the speed and volume of traffic to evaluate if/how it has changed. Various elements of the design have been adjusted in response to community feedback and more changes could be made in the future. In the coming weeks, city staff plan to modify the travel lanes near El Camino Real to improve how the Hopkins/El Camino intersection operates. In addition to evaluating traffic data, the City will solicit community feedback via an online survey before the end of the year.

Installation of the pilot is underway. Alterations to the Alameda de las Pulgas/Hopkins intersection have already begun, in coordination with the pavement project in the area. A new dedicated left turn lane from Alameda de las Pulgas to Hopkins has been added, and the "connector" segment of Hopkins to Alameda de las Pulgas has been switched from two-way to one-way traffic. Striping changes are expected to occur August 12 - 16 throughout the entire corridor from Alameda de las Pulgas to El Camino Real, with the majority of changes taking place between El Camino Real and Clinton. The installation of curb extensions and median islands (made of rubber curb) are expected begin end of August. Raised crosswalks at King and Fulton will be installed as part of the pilot project, as well as pedestrian-activated beacons at Lowell and King. Expected completion of the pilot installation is the end of September. Data collection and community input will be gathered after the installation has been in place for at least 2 months.

Following the February community meeting, several changes were made to the pilot project plans. Updated plans are available here.  The pilot project is scheduled to go to council on April 22. If approved by City Council, the installation is expected to begin in June, with the pilot remaining in place for several months. Data collection and community input would be gathered in the fall, during a time when the local schools are in session.

Award of the construction contract to install pilot traffic calming measures on Hopkins Avenue from El Camino Real to Alameda de las Pulgas was continued at the January 28 City Council meeting to a future meeting to allow more time for additional community input. City staff will schedule a community meeting in February. The pilot project, which is proposed to be installed for a period of 3-4 months, will consist of striping changes and the installation of temporary rubberized curbs, median islands, and speed humps.  This includes the conversion of the Hopkins connector to one-way traffic.The components of the pilot project are consistent with the conceptual design approved by Council in April of 2018 and are available to view here.  Approximately two months after the installation of the pilot, a community survey will be distributed to gauge the success of the pilot.

The construction project to install pilot traffic calming measures along the Hopkins corridor went out to bid in early November and bids were opened on November 28th.  Staff is reviewing the bids and plans to award the construction contract in early 2019. Construction plans for the pilot project are available to view here.

City Staff met on-site with residents in late August to mark the locations of the proposed median islands.  These locations will be used to draft the plans for the pilot project, where the traffic calming devices will be installed with temporary measures such as rubber curbing and rubber speed tables.  Please contact staff using the contact information below with any comments regarding these marked locations.

City Council approved the conceptual design for traffic calming on the Hopkins corridor at the April 23rd meeting.  Much of the discussion at the meeting focused on the size and location of proposed medians, and whether a temporary pilot would be beneficial.  Council’s direction was to pilot the medians in order to facilitate further community input prior to final installation.  Staff is working with the consultant team to create a plan for the pilot installation and will be meeting with local residents regarding the location of pilot medians for each block on the the mornings of Tuesday, August 21st and Thursday, August 23rd from 9am-12pm. If you would like additional information regarding these site meetings, please contact the City using the contact information below.