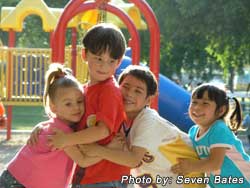 Firefighters see the worst society has to offer, sadly, sometimes on a daily basis. They respond to calls with many tasks to accomplish in a critically short amount of time. Developing a strategy and executing it, whether it is for fighting a fire or a technical rescue, can take as short as 20 minutes from getting the call to the end of the call. However, the call doesn’t end after the fire is put out or someone has been rescued from a totaled car. Often times, fire fighters leave a scene knowing that the victims they are leaving will have a lot of heart ache, recovery and work ahead of them.

It was a gruesome call that inspired the Redwood City Firefighter's Association to launch their efforts to develop the foundation they call, “Create-A-Smile.” Engine 9, Shift B, responded to a medical aid call back in 1993. The details of this call are horrific and the brutality of it is hard to describe. A four-year-old girl had been kidnapped, raped, beaten, and thrown from a car in the parking lot of a storage facility on Hansen Street in Redwood City. She had been abandoned and wasn’t discovered until the next morning. This was a traumatic event that was discussed at length after the crew left the scene.

Captain Meisenbach recalls his feelings from that day, “The most overwhelming feeling I had was that something needed to be done to help the victim (family included) immediately.” Knowing that there are agencies that help victims wasn’t enough. He continued, “There are a lot of programs and agencies that provide services in an ‘official way’ but there was an immediate need that the bureaucracy was not meeting. We decided to bring the victim a huge basket of toys to somehow start the healing process for the family.”

That was the birth of Create-A-Smile. More discussion followed about how to bridge the gap between donors and victims. The fire service is a natural bridge between the two because of the constant contact fire fighters have with people in the community. The scope has expanded to supporting other charities that work at creating smiles. Create-A-Smile is recognized county- wide as a leader in community support.

Create-A-Smile: Mission
Create-A-Smile is a foundation that gives back to the community, specifically to people who are victims of tragedy, violence, and misfortune and have little to no income. We particularly target helping children.

Create-A-Smile: Who We Serve
Today Create-A-Smile continues their mission of giving to the local community in which they serve and other communities in need. Here is a partial list of where the money has gone:

If you know of a child or family that needs a smile or would like to make a tax deductible donation, please make check payable to:

All Redwood City Fire stations will be accepting donations throughout the year.