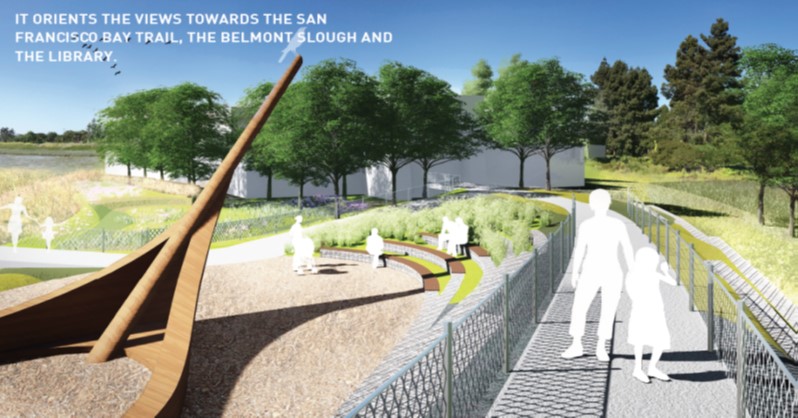 The City of Redwood City has received numerous requests over the years by library patrons (parents and kids especially) to have an outdoor playground adjacent to the Redwood Shores Library. The City has also received public art funds from both capital projects as well as a $25,000 National Endowment of the Arts grant to support a new public art installation. City Council approved the purchase of an interactive public art sculpture called the Pirate Ship, by internationally renowned artists Ilya and Emilia Kabakov. The Pirate Ship will be an interactive play structure, enclosed in ornamental fencing, and connected to the children’s area side of the Library.

The City is currently in the Design Development phase of the Pirate Ship Imagination Art Area. Meanwhile, because the project area is in close proximity to the Bay, the Bay Conservation and Development Commission (BCDC) must review preliminary plans to ensure there is proper access, use of native plants, review potential impacts, and more prior to the issuance of any permits. This review process may take several more months before being able to move forward.

Ilya and Emilia Kabakov are Russian-born, American-based artists that collaborate on environments which fuse elements of the everyday with those of the conceptual. While their work is deeply rooted in the Soviet social and cultural context in which the Kabakovs came of age, their work still attains a universal significance.

Ilya Kabakov was born in Dnepropetrovsk, Soviet Union, in 1933. He studied at the VA Surikov Art Academy in Moscow, and began his career as a children’s book illustrator during the 1950′s. He was part of a group of Conceptual artists in Moscow who worked outside the official Soviet art system. In 1985 he received his first solo show exhibition at Dina Vierny Gallery, Paris, and he moved to the West two years later taking up a six months residency at Kunstverein Graz, Austria.

Emilia Kabakov (nee Kanevsky) was born in Dnepropetrovsk, Soviet Union, in 1945. She attended the Music College in Irkutsk in addition to studying Spanish language and literature at the Moscow University. She immigrated to Israel in 1973, and moved to New York in 1975, where she worked as a curator and art dealer.

In 1988 Kabakov began working with his future wife Emilia (they were to be married in 1992). From this point onward, all their work was collaborative, in different proportions according to the specific project involved. Today Kabakov is recognized as the most important Russian artist to have emerged in the late 20th century. His installations speak as much about conditions in post-Stalinist Russia as they do about the human condition universally.

Ilya Kabakov is credited as the founder of the Installation Art movement which continues to thrive today. He works with his wife Emilia realizing major exhibitions and has work in major museums and private collections around the world. The Pirate Ship is Ilya and Emilia Kabakov's first permanent public artwork and park design in the United States. With the assistance of the NEA grant and following extensive community engagement through design meetings, the Pirate Ship installation is planned to open in 2019.

The Kabakovs live and work in Long Island.