The Art Kiosk aims to bring thought-provoking Installation Art to Redwood City, CA and the Bay Area through ten, month-long exhibitions, throughout 2019. Artists from the region and around the world have been invited to realize their ambitious site-specific commissions – often with the assistance of local volunteers, artists and vendors. Each artist has researched the City and its history and people to conceive their new temporary installation so that each exhibition is meaningful and relevant to the viewers. The initiative was conceived and curated by Lance Fung. Donated project management of the exhibition series is provided by Fung Collaboratives.

The Redwood City Improvement Association funded the initiative for 2019 through their generous grant program. Redwood City acts as the logistical partner and it’s Civic Cultural Commission awarded the project a seed grant to support collateral educational projects for participating artists in Redwood City.

For more information, schedule of upcoming exhibitions, artist talks, and all other events please visit www.fungcollaboratives.org. 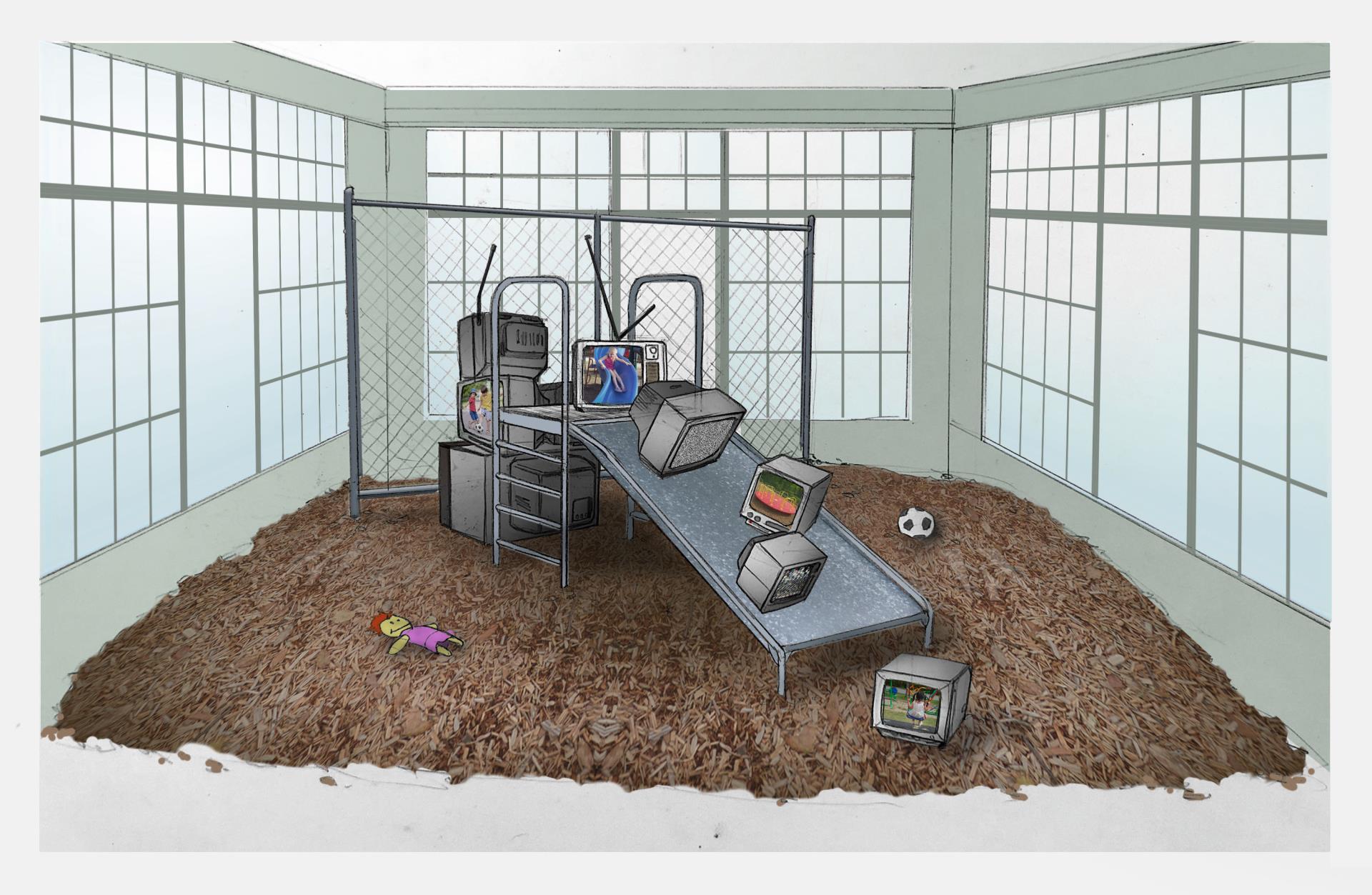 In Recess, Jonathan Fung’s visually provocative exhibition continues to spread awareness on the disconcerting realities of human trafficking. His work targets the vulnerability and innocence of children amidst the haunting nature of modern-day slavery. Fung’s challenging topic cleverly creates a backdrop that weaves connotative signs and symbols for the viewer to engage and extract its meaning.

Recess is a video sculpture with vintage television sets that are strategically placed down a metal playground slide. The TVs play footage of teenage girls and boys playing on a playground. The overarching message is that children are innocent and a valuable resource that should be protected instead of being a commodity for sale. Short films are shot with Kodak Super 8 Vision 3 color motion picture film and juxtapose the innocence of children with an impending metal fence, which acts as a barrier that a perpetrator crosses to prey on its victims.

Redwood City's downtown area is considered the “Entertainment Capital of the Peninsula” with its many restaurants, shops, and theaters. In 2016, Jonathan spoke and shared his art installation, PEEP, during the Before Our Very Eyes event at Courthouse Square as part of Human Trafficking Awareness Week. Recess is a reminder to the Redwood City Community that we are not immune to human trafficking. This wake-up call isn’t meant to instill fear, but to raise awareness and conversation to focus efforts on prevention.

In February 2017, San Mateo County’s first-ever human trafficking conviction was served to a Berkeley man who was found guilty of coercing a minor into prostitution and sentenced to 34 years in prison. “We’re fighting the scourge of modern-day slavery. This is an example of it. Society is reacting to this and saying, “no, we’re not going to turn our heads,” Steve Wagstaffe, San Mateo County District Attorney said. (www.smdailyjournal.com)

If you or someone you know is being forced into any activity — whether it’s commercial sex, farm work or any type of labor — call the National Human Trafficking Resource Center at (888) 373-7888.

Jonathan Fung is an interdisciplinary artist, professor, and social activist. He has created site-specific installations, short independent films, and public art that explore the human condition, cultural and social justice issues, especially the human injustice of human trafficking. Fung’s work is poetic, poignant and thought-provoking has been a platform to expose the darkness of modern-day slavery.

Fung’s public art installation PEEP was featured in the 5×5 Project in Washington DC and during Super Bowl 50 at Levi Stadium in 2016. His site-specific art installation Coolie was exhibited at the de Saisset Museum and exposed the forced labor of Chinese immigrants during the California Gold Rush era.

Fung was invited and collaborated with Nam June Paik, the father of video art, for Modulation in Sync at the Guggenheim Museum and Electronic Superhighway at the Holly Solomon Gallery, both in New York City. Jonathan Fung is a professor and Mosaic Faculty Fellow empowering social justice and diversity at San Jose State University and teaches photography and art through a social justice lens.

About Education and Awareness

Pamela Estes, Co-Creator, Before Our Very Eyes, together with other San Mateo County
Organizations will partner at the Art Kiosk.

The Bonds Unburnt exhibition is meant to embody the connections we have with other people, and relate those connections to the tragic California fires of 2018. The exhibition attempts to express our horror at the tragic Camp and Mendocino Complex Fires of last year. One of the main ideas for this exhibition is the Japanese “red string of fate” legend. It states that we are each connected to another person, whom we are destined to meet, with an invisible red string. We use orange string to symbolize the fires and our connection to those affected. It becomes a powerful symbol of the fact that most of us will experience a natural disaster. Each time it happens, we feel a connection to the people affected.

After an event like this, the atmosphere itself becomes a constant reminder of the tragedy that took place thanks to the overwhelming smell of smoke. That smell lingers for months, and leaves the affected area a health hazard long after the flames are extinguished, and even clings to clothing, so that reminder travels with you. By recreating a scent in the ART KIOSK atmosphere, Bonds Unburnt hopes to strengthen the theme of connection by giving the audience some semblance of what experiencing the fires was like.

Strings are used as a symbol of the fires combined with charred wood and personal items from the artists and donations from Redwood City residents. These comprise the main sculptural hourglass form. The sculpture consumes the space by being 12 feet high and 6 feet in diameter. Two rings of steel will create the top and bottom. There will be a smaller ring in the middle. Many strings will connect the rings. The created basket at the middle of the hourglass will embrace the personal items and the charred wood will be on the ground under the hourglass. The wood element was carefully transported from the site of the Rim fire near Hetch Hetchy in Yosemite, 2013. Luckily there were no fatalities in that fire. The artist use light to enhance the exhibition’s mood after dark by creating anti-shadows: light seen through the string from the outside.

The personal items we have all contributed to the exhibition are things which we considered somewhat unique to our own lives. We all felt very sad when thinking about the tragedy, and we all wanted to express that sadness in this exhibition. We hope it will somehow help those suffering.

Jose Castillo is a current San Jose State University student finishing out his Bachelors of Arts. His desire to create is fueled by a desire to maintain a connection to childhood and leave the world a kinder place than when he found it. He believes that societal tendencies to view children’s passions and imagination as things they should outgrow are among the leading causes of adult misery in his generation. As such, the main goal of his artwork ranges from drawing to painting to printmaking is to inspire audiences to abandon arbitrary limitations on their own happiness and challenge the worldviews and institutions that put them up.

Peter Moen grew up during the 60's in south San Jose, California. After High School, he went to U.C. Berkeley to become an engineer. He then worked as an engineer at a rocket company. He loves to incorporate portraits into 2D art using oils or acrylics. Moen likes to use his skills as a portrait painter to unburden himself of feelings about current events by using partially abstract or non-objective oil paintings that include natural or abstract portraits. His paintings often depict current political events that he is terrified about. He is currently in the MFA program at San Jose State University.

Tiffany Seav graduated from San Jose State University of Spring 2019 where she earned her Bachelor of Fine Art in Pictorial Arts. Many of Seav’s artworks question whether humanity still exists or not; for Seav, she wants to give up and reject her humanity. Seav is skeptical and doubtful whether humans will ever put aside one’s differences and work together; however,
Seav still has reserved a small aspect of hope while observing and watching what will happen to humans as they proceed forward. Seav explores her art making through painting, printmaking, screen-printing, design, sculpture, and interest in theatre acting.