In April 2014, the San Francisco Public Utilities Commission (SFPUC) informed the City the need to modify the SFPUC engineering standards and land use policies for their entire right-of-way. Though the City had nearly completed the 65% construction drawings at the time, the project could not move forward based on their direction and the uncertain change of requirements. Since the park is not on City land, the City was required to comply with the SFPUC requirements, process, and approvals. Several months later, SFPUC completed their study and have allowed the City to move forward with the project using their revised engineering standards and recreational use policies. More about the finished project can be found here.

Redwood City has recently completed the installation of rooftop solar panels and a solar carport at the Red Morton Community Center. This was the City’s first solar project on a municipal facility. The solar panels were placed atop a brand new carport that runs down the center of the existing parking lot, as seen in the photo. The solar panels took about 10 weeks to install and the project was completed in early 2016. The project will produce approximately 76% of Red Morton Community Center’s consumption and save as much as $342,125 over the 20-year life of the project.

The City Council approved solar power at Red Morton Community Center as part of the Regional Renewable Energy Project (R-REP) on March 23, 2015. The R-REP is organized and led by Alameda County, with 19 Bay Area public agencies participating in this collaborative procurement process for renewable energy. For more about R-REP visit their website.

With the design services of Moore Iacofano Goltsman, Inc. (MIG), the City completed a plan for a new dog park located between on Main Street between Beech and Elm Streets.  Unlike typical dog parks that commonly function only as a dog run, this small triangular underutilized park will be converted to a park for the agility practice and socialization of dogs.  In addition to the dog park, improvements were made to the right-of-way such as new sidewalks, new crosswalks, and new street lights and trees. The park features:

The intention of this new park is to have an off-leash area where you can have fun with your dog! 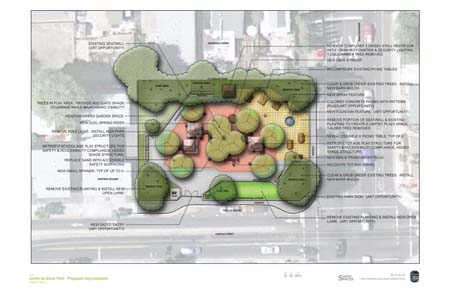 The renovation of Jardín de Niños Park has been completed! Take care of the park, it's yours!

Highlights of the renovation include: