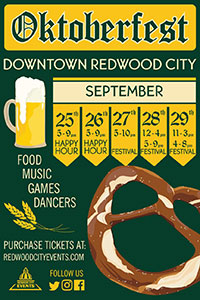 The true tradition of Munich's famous annual festival comes to Redwood City for Oktoberfest, with a huge decked-out Oktoberfest tent on Courthouse Square - complete with over 1,100 feet of "family style" bench seating, lots of fun and merriment, music, dancing, contests, cold beer and other beverages, food, and more!

The entrance fee includes a commemorative stein & 1 drink ticket (beer or soda depending on ticket type), along with great German-style entertainment featuring AlpinersUSA and The Golden Gate Bavarian Club. Delicious German food and extra drink tickets will be sold separately.

VIP tables seat 6 people and include 12 drink tickets. VIP attendees have a special entrance door. Not all group members have to arrive at the same time. Table guests can be a combination of Adults and Youths, ID’s will be checked for age. Sales begin mid-August.

Online sales will close 2 hours prior to the event. Tickets will then be first come, first served at the entrance.
The tent opens 30 minutes prior to each seating for ticket sales.

Ticket prices include a commemorative stein and a drink ticket (beer or soda depending on ticket type), along with great German-style entertainment featuring AlpinersUSA and Bayerischer Heimat und Trachtenverein as dance performers and game hosts. Deutscher Musikverein perform on 9/25, with The Internationals on 9/26, bringing German dance song favorites for the Happy Hour seatings.

Advanced online ticket purchase is recommended, as this event may sell-out prior to door sales. No refunds or exchanges. Food not included in ticket price.

*While children are welcome to join us at Oktoberfest and enjoy the music, dancing, and food, there will be no dedicated children's area or activities at this event.

lpinersUSA- the SF Bay Area's Premiere Oktoberfest Band - is a show and dance band that invigorates audiences wherever it performs in public and televised events all around the country, including major festivals in Pennsylvania, Texas, Utah, Oregon, CA and Washington.  The band was founded by accordionist Joe Domitrowich and began performing in the Bay Area over 20 years ago.  With authentic yodeling by vocalist and native Bavarian, Margot Turrell, AlpinersUSA performs on par with the best local groups you would encounter in and around the home of Oktoberfest, Munich, Germany, or towns and local folk festivals throughout Austria. Playing everything from Oktoberfest standards like Beer Barrel Polka to Van Morrison's Brown-Eyed Girl or big band In the Mood like you've never heard it played, or one of their originals like Oktoberfest Blues, AlpinersUSA offers something for everyone in the audience http://www.alpinersusa.com

The Bayerischer Heimat und Trachtenverein "Golden Gate" was founded in August 2005 to focus on preserving and promoting Bavarian culture in the San Francisco Bay Area. The club was to focus on broad aspects of the culture, including dancing Austrian folk dances and the Schuhplattler, and singing traditional folk songs.

B.H.T.V. "Golden Gate" wears Tracht from the Miesbach region of Bavaria, which is made in Germany, by skilled specialized tailors. While the clothing items themselves are correct and authentic for this region, we have selected the colors blue and gold to represent our ties to California. The band continues to preserve and promote Bavarian culture in the San Francisco Bay Area through handcrafts, cooking, singing, dancing, supporting our favorite München fußball teams, wearing our tracht, and enjoying each other's company in Gemütlichkeit.  http://www.bhtvgoldengate.org 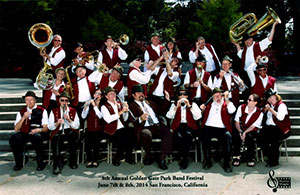 Since 1938, the Deutscher Musikverein has entertained audiences around the San Francisco Bay Area with traditional German marches, polkas, European folk and concert pieces in addition to favorites of jazz, pop and Broadway. Founded by a group of German-Americans as a hobby community band, the band today includes amateur and professional musicians of many nationalities and vintages and continues to contribute to the cultural activities of the San Francisco Bay Area. http://sfgermanband.org 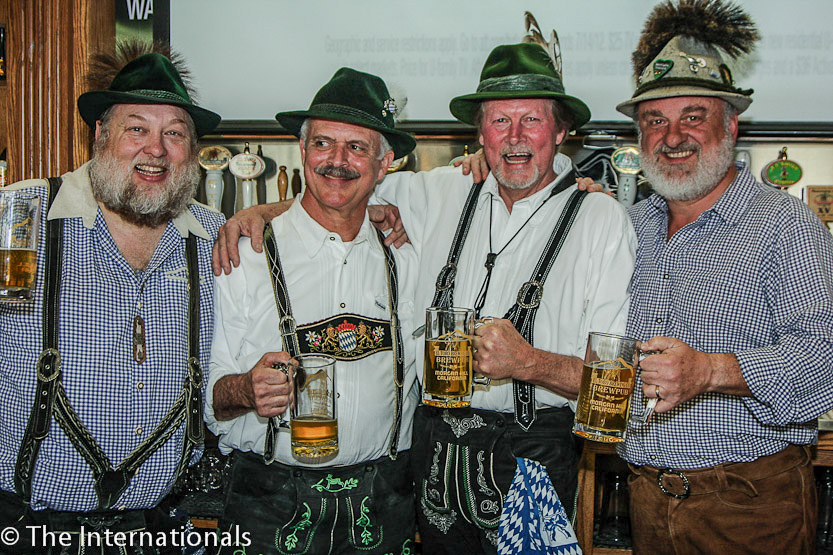 The Internationals is a dance band with the ability to play virtually any style or genre of music. Naturally, they play all the European dance favorites -- polkas, waltzes, schottiches, etc. -- but also mix in traditional favorites from a variety of European countries. In addition, they play a smattering of American jazz, blues, country and even rock-n-roll classics. It's not uncommon to hear a polka followed by a country western classic! The Internationals truly play "Dance Music from "Everywhere"! http://theinternationals.com